Interview with Justice [Time Out] 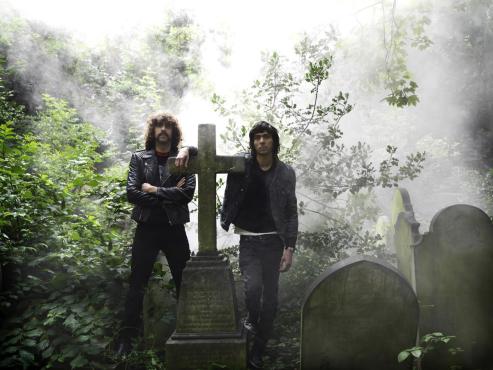 They named their new LP Audio, Video, Disco (Latin for ‘I hear, I see, I learn’), but the French DJ duo Justice toned down the usual disco beats in favour of British ’70s glamrock elements, a step that is apparently not everyone’s tasse de thé. Has Justice turned away from its French roots?

‘For us, there isn’t a real revolutionary shift towards a rockier sound,’ says one of the pair, Xavier de Rosnay over the phone from Sydney, where he and partner Gaspard Augé have just started playing their new album on a world tour. ‘We’ve just been continuing what we had started with our first album Cross, and this is the result.’

But the critics had a hard time deciding what to think of Justice’s long-awaited sophomore album. It’s ‘bold’ (Mojo), but also ‘soulless’ (XLR8r) and with ‘little style’ and too much concept (Pitchfork).

‘Well, I wouldn’t say there is a deep concept behind Audio, Video, Disco, because that would make it sound more complicated than it really is,’ De Rosnay quips. ‘Music just has to be pleasant to listen to and this album is just a bunch of simple ideas and influences.’

They take their inspiration from pretty much anything. After the release of the Grammy-nominated Cross in 2007, the two lads toured for one-and-a-half years straight. ‘We then worked separately on projects: Gaspard went on to produce a record with Mr Oizo, while I worked with a French electropop band called Jamaica,’ says De Rosney.

So what makes their music still French at heart? ‘I think what makes our music French is that we’re romantic without being ironic,’ he guesses.

During their 2012 world tour, Justice will play in a sold-out Paradiso, and unite their non-ironic ‘blend of melancholy and happiness’ with possibly the most ironic rock genre of all, British glamrock. That, certainly, is bold.

Eerder gepubliceerd in Time Out Amsterdam.